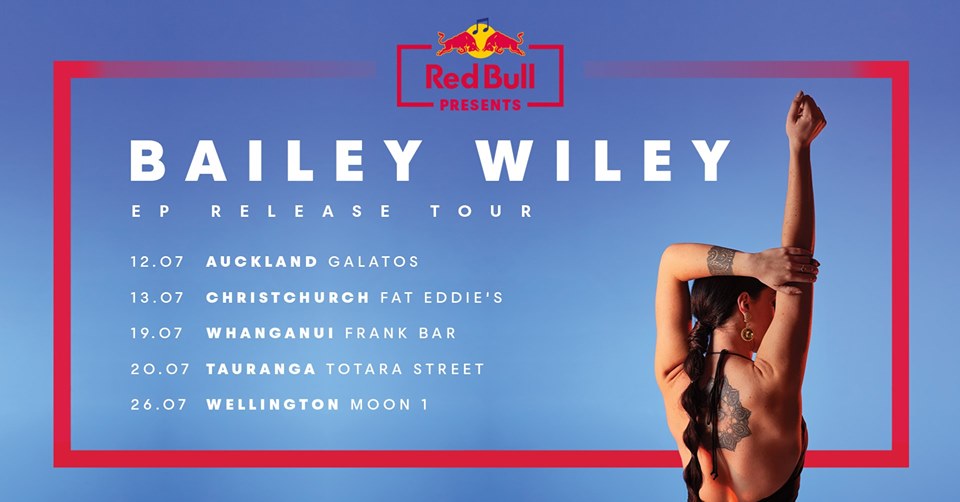 Bailey Wiley is back in the game with her new self titled EP, and she’s celebrating the best way she knows – by going on a five-date nationwide tour, her biggest to date.

The six-track EP is Bailey’s most personal and accomplished project yet, and she called on some of New Zealand’s most exciting songwriters and producers to help bring the songs to life at Red Bull Music Studios Auckland. She shares songwriting credits with Tom Scott, Soraya LaPread and ENO X DIRTY’s Manu Walters. Friends Noah Slee and MELODOWNZ make vocal appearances on a track each, and production credits include ENO, Josh Fountain, High Hoops and SmokeyGotBeatz. But more than anything, this is Bailey Wiley’s project, six songs that document her rediscovering her passion for music, and falling in love.

Fans will get to experience this passion and energy in her live shows, as Bailey takes a band on the road for the first time, promising that plans are underway to make the shows something special.

“The songs that made it on this EP are individually beautiful in their own right, they each have a purpose and a reason. I look forward to touching more on this through live performance when we go on tour in July.”

Bailey Wiley’s self-titled EP is out now on streaming outlets via A Label Called Success. The tour is on sale now at Under the Radar. Get in quick, Bailey’s on a hot streak.