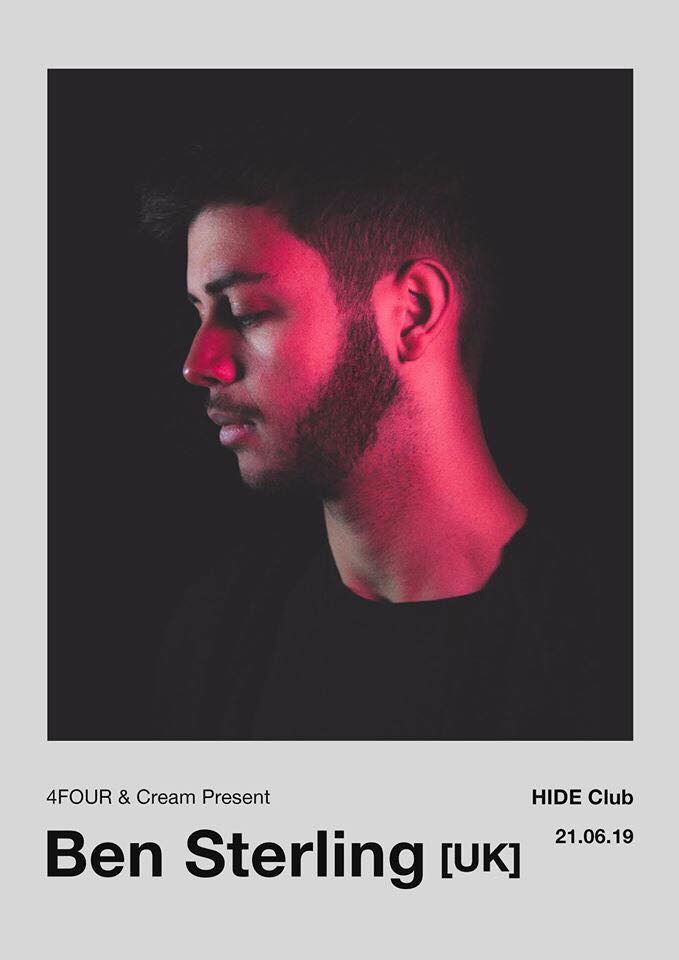 With local support to be announced
Main event info:

– There is no dress code, however make sure you have appropriate footwear.

– Everybody love everybody! 4FOUR, Cream and Hide are committed to being a safe and all-inclusive space. Any discrimination, harassment or anti-social behaviour of any kind will not be tolerated. If you are feeling uncomfortable in any way, please notify security, a member of staff at the bar, door or DJ booth.

Influenced by his family’s golden 70-80s Disco collection, modern Electro and with an insatiable passion for the history of Chicago House and Detroit Techno, self-taught DJ and producer Ben Sterling continues to count some of the most influential tastemakers in international electronic music as supporters – and with good reason. His sets brim with Acid House and Raw Electronic Groove, blended together with a mesmerizing uplifting fluidity that belies his age. Championed by Jamie Jones, Danny Howard, Eats Everything, Lee Foss, Josh Butler and more, Sterling has already featured on the likes of Hot Creations, Repopulate Mars, Edible and Origins Rcrds – one of the first residents hand picked by Butler himself.

At just 18, his residency for Rulin’ at London’s Ministry of Sound marked him out as one to watch. It wasn’t long before he began to come through on the early promise. Mentored by Josh Butler, his 2017 Origins EP ‘Besides Me’ was swiftly followed by ‘Wonky’, ‘Strings & More’ and his second Origins release ‘Ciao’, a run of records that soon caught the ears of Hot Creations boss Jamie Jones. The UK legend dropped
seven of Sterling’s productions during a single EDC Las Vegas set, showing the same level of support at shows across Paradise, Coachella, Circoloco, Timewarp Germany and more. Jones was not the only one picking up on the youngster, as both Lee Foss and Eats Everything called on Sterling’s talent, the latter remixing one of Sterling’s own tracks, ‘Dance Machine’ (Eats Rebeef).

On the road, Sterling has begun to match his success in the studio. A coveted residency at the Warehouse Project stands alongside sets at Paradise, Kaluki and Elrow, while confirmed shows at Printworks, Hideout Festival and Snowbombing are a sure sign of things to come.

With his eye now firmly on the rest of 2019 – which he kicked off in style as Danny Howard’s first Future Fire guest of the year on BBC Radio 1 – Sterling looks certain to continue on his trajectory towards the upper echoelons of dance music.