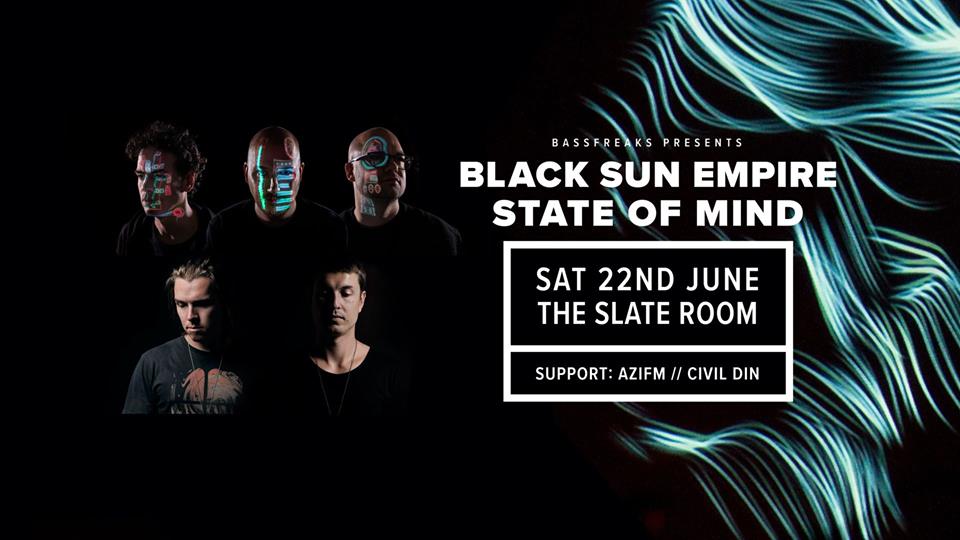 Tickets on sale now at: http://bit.ly/BSESOM

***These will sellout fast**

Black Sun Empire represent the finest in dark and tech fueled dance-floor drum & bass. Since bursting onto the scene back in 2000, they’ve continued to develop their own unique style and sound, releasing numerous singles as well as four full-length LPs and establishing themselves as leaders in the field. With their impressive DJ skills and inspirational productions, Black Sun Empire have reached far beyond their native Holland. They’ve toured the world many times over, with highlights including top festivals like Glastonbury, Tomorrowland, Electric Daisy Carnival, and numerous other festival appearances both in the UK and abroad. Black Sun Empire continue to build on their growing reputation as some of the most exciting and consistent performers around. Their label Blackout has equally been going from strength to strength with highly anticipated releases and regular worldwide label showcases

Not happy being mere producers and djs, SOM Music was launched in 2009 and is now regarded as a premier niche label in its own right. SOM Music is home to artists like Nymfo, Black Sun Empire, Jade, Mindscape, Dose, Borderline, Trei, Neonlight & Incognito to name a few.

State of Mind released their first full CD Take Control on Uprising Records in 2006, an album that garnered them the publicly voted award of Breakthrough Artists of the year on the B-Net radio network in NZ, and a nomination for a prestigious NZ Music Award.
In March 2009 they released their second LP, ‘Faster than Light’ on their own label SOM Music.
Their third album called ‘Nil By Ear’ was globally released in April 2011, peaking at number 5 in the NZ Charts. This was also nominated for a NZ Music Award.

State Of Mind are the former hosts of the hugely popular Next Level 95BFM drum n bass show. The show has now been relaunched in monthly podcast format due to popular demand.

Moving forward State of Mind are now signed to Black Sun Empire’s flagship ‘Blackout’ label, and will be releasing their 4th album called Eat the Rich internationally early 2014 on Blackout & SOM Music. The first single from the album Mr Cover Up is now available. It hit the #1 release in all genres on Beatport.