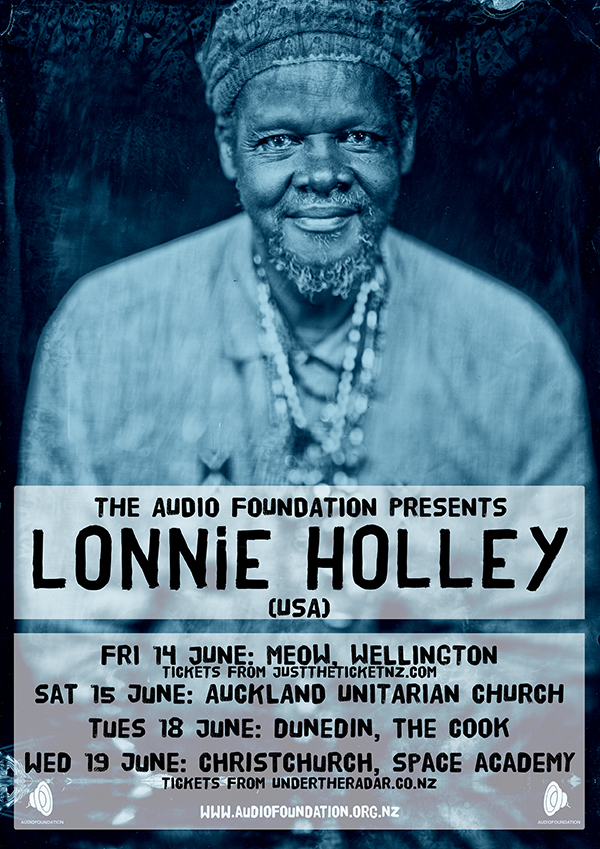 Audio Foundation is ecstatic to announce a very special NZ tour for the revered artist and visionary musician Lonnie Holley, who sings and improvises to make sense of a troubled America.

The story of Lonnie Holley is incredible; he was born 1950 in Alabama, one of 27 children during the heigh of racial segregation in the USA and was traded for a bottle of whisky when he was four. Despite a chaotic childhood, working from the age of five, Holley has become one of the most important cross-disciplinary visual artists and musicians in America. He went from living in a whiskey house, on the state fairgrounds, to exhibiting work and performing at some of the most powerful institutions in the world; the White House, the United Nations and the The Metropolitan Museum of Art.

‘…everything I’ve experienced, I’ve made a piece of art to go along with it.’
Lonnie Holley

Since 1979, Holley has devoted his life to improvisational creativity. His art and music, born out of struggle, hardship, but perhaps more importantly, out of furious curiosity and biological necessity, has manifested itself in drawing, painting, sculpture, photography, performance, and sound. Holley’s sculptures are constructed from found materials in the oldest tradition of African American sculpture. Objects, already imbued with cultural and artistic metaphor, are combined into narrative sculptures that commemorate places, people, and events.
Most recently his 2018 album MITH was released on Jagjagwar (the same label as Unknown Mortal Orchestra), with his single ‘I Woke Up in a Fucked-Up America’ making Pitchfork’s top 20 songs of 2018. His work has also been featured in some of the biggest art galleries in the United States; The Smithsonian American Art Museum, and The Whitney Museum of American Art to name a few.

Press:
Somebody does something a little different and plenty of folks are ready to dub them a ‘self-made man’ or ‘self-made woman.’ But what Lonnie Holley does, and what he has made of himself, demands a whole new term. He truly is his own invention. – NPR

“His work is rooted in experimental and noise traditions, but it also contains an excess of love and imagination.” – The New Yorker

“He collects our ugliest obscured objects and transforms them into singular reflections on our troubled world.” – Pitchfork

Lonnie Holley is the closest thing America has to a prophet. – (Noisey) VICE
•
He keeps people spellbound with his oratory, humor, and insights into art-making. Holley’s art does the same. He makes the kind of sculpture–and produces the kind of music–that changes people. It gets into their emotional and intellectual core and forces them to rethink art and history, as well as their own assumptions about how the world works. – SF Weekly