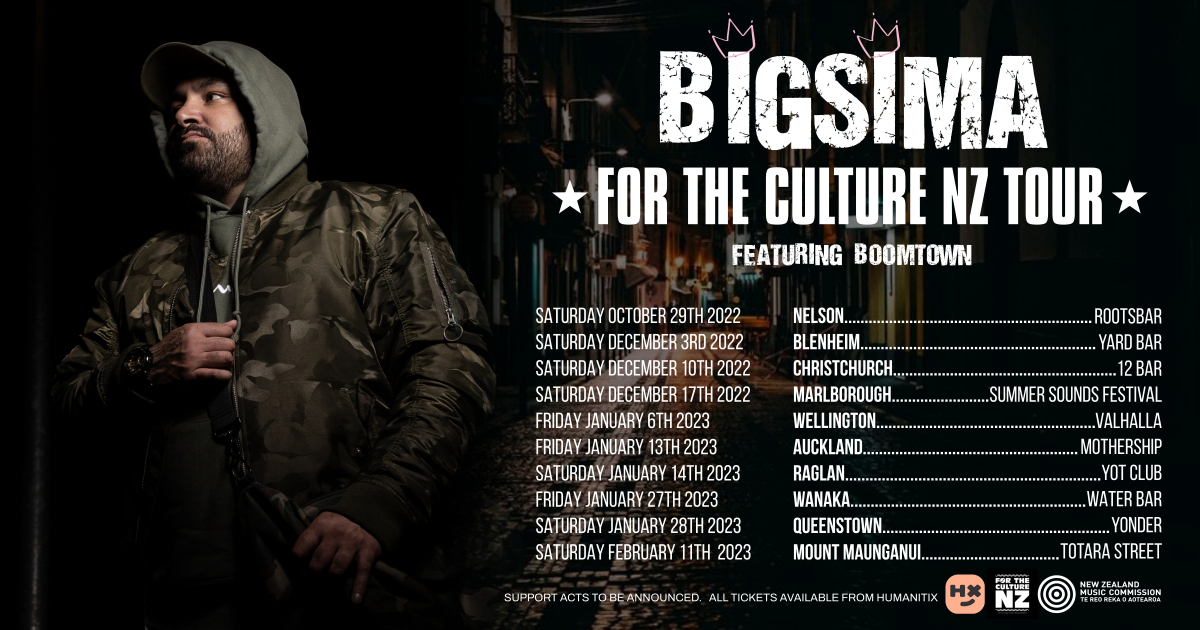 The wait is finally over!

After a busy 2022 with headline shows up down and the country, the Underground King has teamed up with 7 piece ensemble Boomtown to bring an epic mash up of horn driven, guitar riffing, head nodding hip hop!

Currently one of the most active NZ hip hop artists on the live circuit, ‘The Underground King’ aka Big Sima is no stranger to the big stage. During his come-up he has played support for everyone from Busta Rhymes to Bone Thugs’n’Harmony, Guru (Gangstarr), Mobb Deep and Cypress Hill.

His stage presence and overall performance acumen can only be matched by the sonic value of the beat-bumping, bass-box booming mixes courtesy of longtime friend and fellow collaborator Tiki Taane.

After 4 years of hard mahi together at ‘Tiki Dub Solar Powered Studios’ in sunny Papamoa this year the duo finally released Sima’s debut LP, aptly named ‘Stereotypes Of A Polynesian Misunderstood.’ to critical acclaim – unlike many other rap albums that just throw together songs, this a complete body of work and indeed Big Sima’s ‘magnum opus’. After 4 successful single releases thus far, over 500k streams across all platforms and 1000s of spins on radio stations up and down the country, the most recent release “Truth” has made it into the top 10 on the Hot NZ Singles Chart and Top 40 songs most added to radio in the country. These are epic feats for an independent hip hop artist in Aotearoa.

The last two years have been exceptionally busy on the live front; with guest appearances on stage with both Summerthieves and Dolphin Friendly, as well a special bucket list performance of ‘Revolutionaries’ alongside Tiki Taane and the Christchurch Symphony Orchestra at the town hall for ‘Otautahi Proud.’ As well as those notable guest appearances, Big Sima also started picking up momentum on the festival circuit with performances at Go Live, Summer Sounds and Soundsplash.

This is not to be missed!