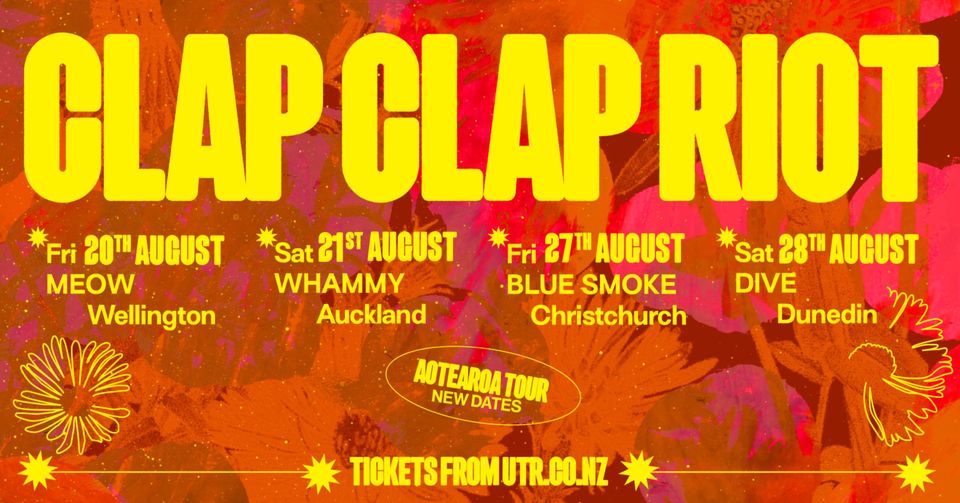 With their initial tour planned for March, the gremlin that is Covid-19 has forced the rescheduling of all of Clap Clap Riots original tour dates to August.
Between lockdowns and a sold-out guilty pleasures show at Auckland’s Whammy Bar, the band has been working on the follow-up to their third full-length album. The final flourishes are currently being put on the yet-to-be-titled release, which is being recorded with producer Tom Healy inside Mount Eden studio The Lab.
Ahead of the release, Clap Clap Riot will visit four centres across the country to perform a combination of crowd favourites and new material. This will be the bands first nationwide tour since 2019.
The tour kicks off at Wellington’s Meow on Friday, August 20th before making its way to Auckland’s Whammy Bar on Saturday, August 21st. On Friday, August 27th it’s Christchurch’s turn at Blue Smoke before the tour ramps up to its finale in Dunedin on Saturday, August 28th at Dive.
Clap Clap Riot
August Aotearoa Tour – NEW DATES
FRI 20 AUG – WEL (Meow)
SAT 21 AUG – AKL (Whammy)
FRI 27 AUG- CHCH (Blue Smoke)
SAT 28 AUG – DUN (Dive)
Tickets from UTR.CO.NZ
+ Google Calendar+ iCal Export