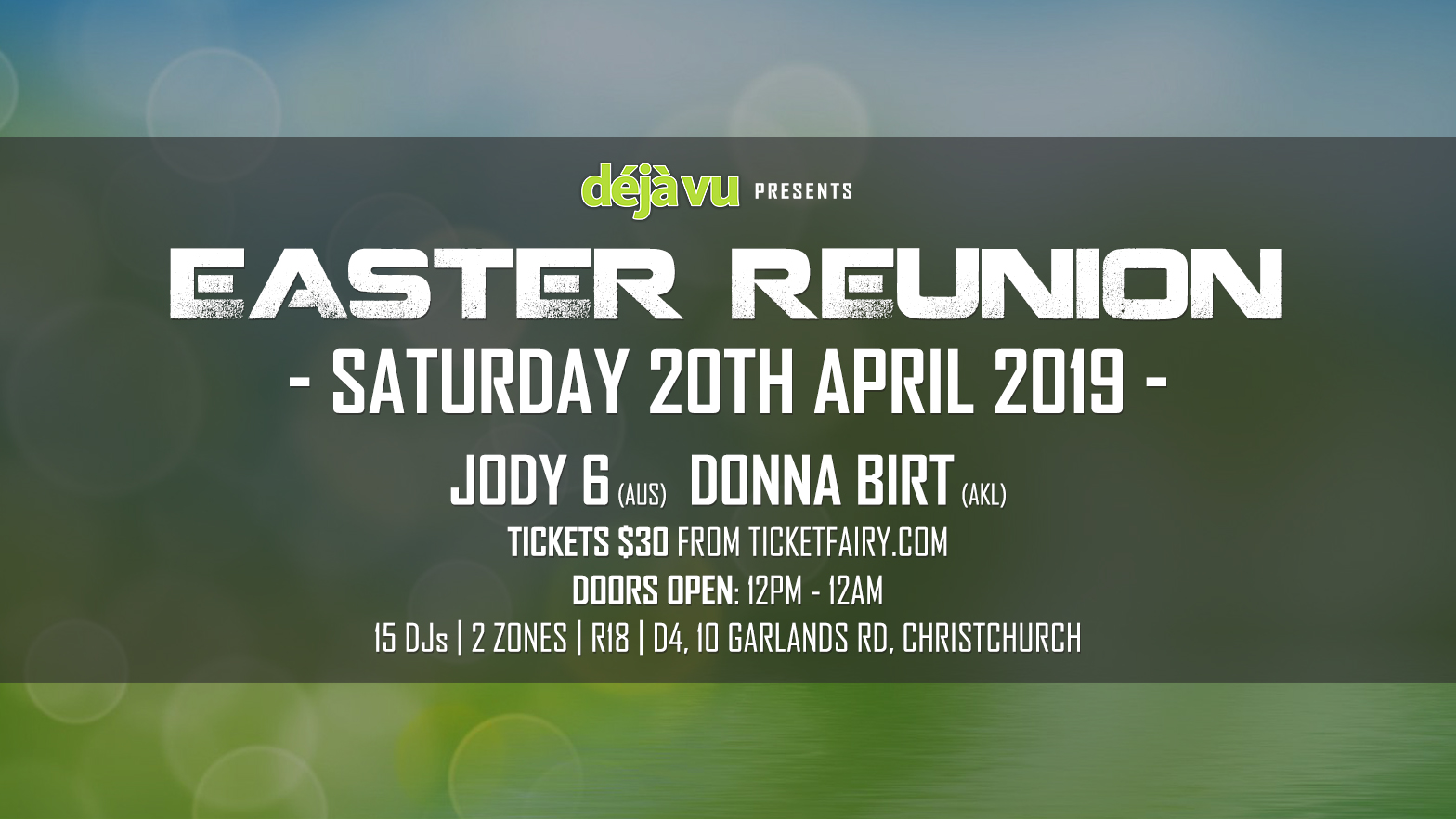 Doors will open during the day at 12pm till 12am

Déjà Vu will be pulling out all the stops with full lasers and digital screens and decor, this will be a once off party not to be missed, a celebration and recollection of NZ Djs and friends…..YOLO 😇

Tickets on sale https://www.theticketfairy.com
$40 on the door

From her first set in August 2002, DONNA BIRT has demonstrated an undying dedication to her audience and passion for the music she plays, earning her spot sharing line-ups with the likes of Farley, BK, Sentience, Glazby and the rest of the Hard Dance jet-set. She packs one hell of a punch with her own style of chunky, groovy, driving hard dance and techno. She moved to London in 2000 to find something a little different. At that point Hard Dance wasn’t on the agenda but on arriving she found that her circle of friends had become heavily entrenched in clubland and found herself wondering what all the fuss was about.

It wasn’t long before she’d found herself curious about trying her hand at mixing and within six months already had her first spot playing out, not long after this she was granted her Endorphin residency. A further six months down the line and Donna had herself a regular guest spot at London’s Frantic becoming it’s most regularly booked guest. Her residencies include; Endorphin – UK, Hardware – UK, D and A Music – San Francisco. Natural progression led Donna into the studio to get some of herself down on vinyl: first with Ali Wilson for their track ‘Ruthless’; and then two tunes with Greg Brookman ‘Groove Junkie’ (Nukleuz CD-R) and ‘Rhythm Detox’. Since her return to NZ in 2006 (she is a kiwi after all), Donna has played NZ gigs such as London Hard House Reunion, Fevah & Decadance, and overseas major events such as Frantics: Convergence, Timeless, Hard House Academy, Chemistry and Liberation. Other London promotions including Endorphin (resident), Hardware (resident), Innovate, X-Static, Riot, Vicious Circle, Wildchild, Xtreme Euphoria, Lashed, Torque, Girls Torque, Logic, Sundissential and Twisted. She has also toured internationally and played throughout Australia and South Africa

You’ll be guaranteed to hear some chunky techno and some old school classics mixed in between!

JODY 6 is a Trance and Hard House DJ and producer from Brisbane, Australia. He has played at leading electronic music events in Japan, the UK, New Zealand, and Australia. His unique uplifting style of production has resulted in over 130 tunes released

After beginning his music career as a producer he then got into DJing, starting of as a resident at the Tokyo super club – Code.

JODY 6’s unique blend of uplifting hard house has resulted in his demand to headline at leading events around the world such as Frantic and Storm in the UK, Frantic, and NRGetic Romancer in Japan, and Hard House Reunion, Frantic, Fevah, and Hardbeat in New Zealand. In his home of Australia, Jody 6 has headlined at events throughout Australasia including; System 6, Adelaide, Frantic, Sydney, Electrified, Perth, Energise in Melbourne, Deja Vu ,Christchurch, Hardbeat,Brisbane.