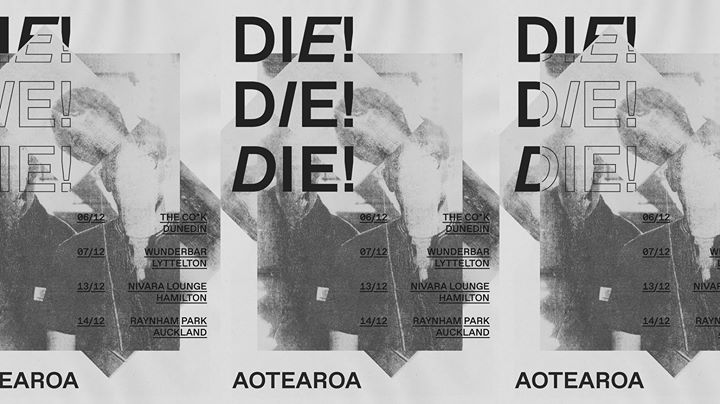 All proceeds from the tour and merchandise sales will go towards the band returning to Chicago in 2020 for the recording of their next full length album. It will be produced and mixed by legendary engineer/musician Steve Albini (Shellac, Nirvana, PJ Harvey), who Die! Die! Die! worked with on their debut, self-titled album in 2005.

The tour also celebrates the release of their critically acclaimed 2019 EP ‘O’ which came out in April this year and sold out online within 60 minutes. The EP has been repressed by Zenith records in Melbourne and the band will have 7 inches of the vinyl available at all shows.

Further cause for celebration is their seminal record Promises Promises having been remastered, and finally reissued on vinyl. A limited number of 500 copies are to be released worldwide on December 6th, which have been pressed at New Zealand vinyl plant Holiday Records. The album will be available on the band’s Bandcamp and on tour if not sold out prior.

This reissue of the album will be entirely self-released and self-supported and allow for donations from fans to help fund the band’s journey to Chicago.

The long-running core team of guitarist / singer Andrew Wilson and the furious drumming of Michael Prain have been going strong since their formation as Die! Die! Die! back in 2003 and in 2018 they welcomed bassist Lachlan Anderson back into the band full time.