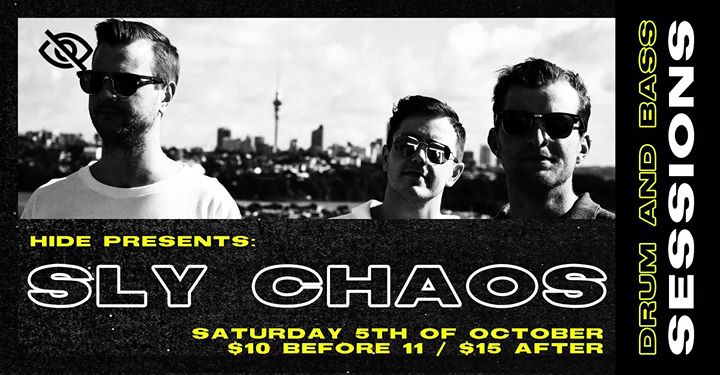 A series of nights dedicated to showcasing the best local & national Drum and Bass producers, DJ’s and MC’s New Zealand has on offer.

Hailing from Auckland, NZ. Sly Chaos is a Drum & bass trio with Conor Till & brothers Andrew and Michael Enderby.These three have supported some of the biggest artist in the game such as Friction, Pendulum, Wilkinson, The Upbeats, AMC, Black Sun Empire and
Hybrid Minds just to name a few.

After tearing up the cellar stage at Rhythm & Vines, the lads have kept the plates spinning straight into 2019. They recently dived head first into the world of
promoting, starting with some of the biggest in the game (Friction). Fast forward a few months and the boys have landed themselves a weekly residency on New Zealands biggest electronic music station George FM.

The three of them get their mixing inspiration and style from two of the greatest the Executioner Andy C and the 4 deck wizard, AMC. Both their mixing styles and energy are what they aspire for in their sets. High energy, full spectrum sets with the freshest palette possible.