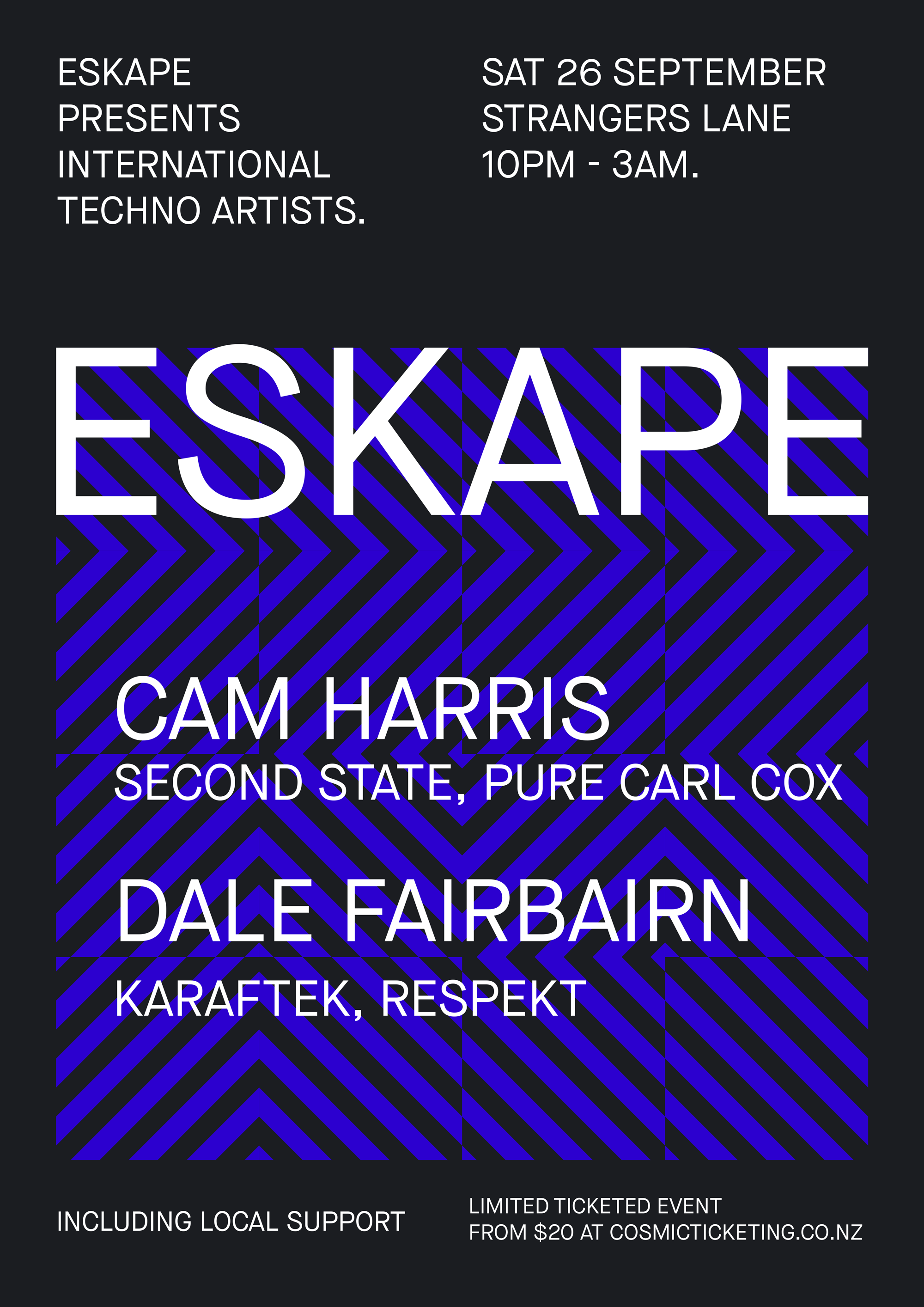 Eskape is a brand new club night celebrating the full spectrum of Techno – deep, melodic, raw, driving, peak time, and everything in-between.
To kick off our inaugural party we have two headline acts you won’t want to miss.

A huge doubleheader, two of New Zealand’s techno heavyweights producers & DJ’s Cam Harris Second State & Collude Auckland and Dale Fairbairn (Kraftek, Respekt). Their complementary styles will take you on a transformative techno journey as we explore the full spectrum of the sonic soundscape this incredible genre has to offer.
As the name suggests, Eskape sets out to provide an evening of impeccable music where you can free yourself and get lost in the music amongst a fun and friendly atmosphere.

Join us on Saturday 26th September to make it your release!

Joining us for this momentous occasion, we are delighted to welcome Cam Harris back to Ōtautahi. Well known for his beautifully crafted sets and huge tracks, Cam has performed alongside artists such as Carl Cox at both ‘PURE NZ’ events in 2017 & 2018 which also hosted legends Adam Beyer, Paco Osuna and Nastia. He has also supported a long list of international acts, Doorly, Javi Bora, Miguel Bastida, Christian Smith, Dale Howard, German Brigante, Hernan Cattaneo, Ben Pearce, Nic Fanciulli, Wankelmut, Claptone and many more.

Cam released his first album in collaboration with German based Brazilian artist and friend Rafa Kao in 2017 called ‘Gratitude’ on Juno Records, as well as numerous releases on local and international labels including House 4 Life Records, Cabbie Hat Recordings, M5 Records, Tinnie House records, and Arrivals Records amongst others. After spending the majority of 2019 in Brazil soaking up the larger scaled events and in the studio, Cam most recently released big-room techno banger Order, a collaboration alongside Rocko Garoni and K.A.L.I.L. on the Second State label Pan Pots label. Keep an ear out for this driving, festive, tribal celebration that brings the house down every time.

Dale Fairbairn has established as an emerging powerhouse in Techno from his Christchurch-based studio. Through his exceptional dedication to his craft, Dale has had tracks snapped up and released on some of Techno’s top 10 best selling labels such as Kraftek, run by Pleasurekraft and Respekt run by Spektre, Funk’n’ Deep, Unity Records and many many more.

Building on his recent momentum Dale identified the opportunity to launch a local, high-quality event, and the concept for Eskape was born. Dale’s sets are a journey of no-nonsense cuts transporting you through a blend of hard-hitting beats and deep atmospheric landscapes.