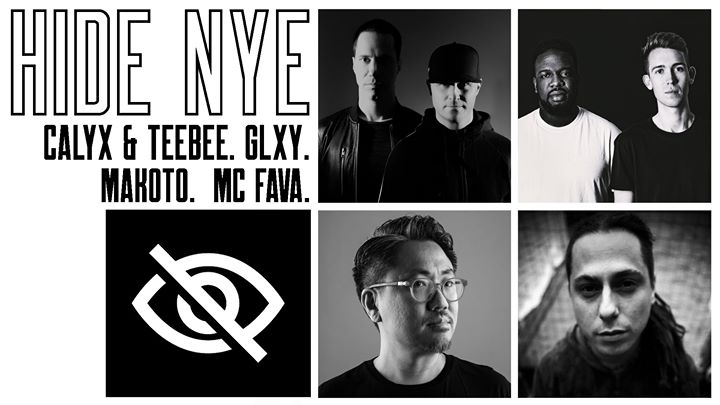 With a super stacked lineup this is the only place to be this New Years Eve in Christchurch.

Calyx & TeeBee
For two decades, Calyx & TeeBee have forged an unprecedented path at the forefront of Drum and Bass. They had already amassed an astounding back-catalogue spanning all of the genre’s seminal labels, before they came together to form a duo 10 years ago.
After becoming a permanent duet, Calyx & TeeBee launched Momentum Music, which marked its first release with their debut long player. The ‘Anatomy’ LP proved to be one of the most highly anticipated albums in D&B for years, gaining massive support from the scene’s big players and topping sales charts for months. ‘Anatomy’ proved to be a game changer, and following its release Calyx & TeeBee embarked on several unrelenting tours across the globe, venturing into joint DJ sets featuring 6 decks and 3 mixers with both DJs in action simultaneously. Meanwhile the duo started to lay groundwork for their follow-up LP which they dedicated five years to complete.

In 2012, Calyx & TeeBee signed to Ram Records, arguably the biggest and most respected drum & bass label in the world and a leading light in the multi-genre bass music scene. Featuring stunning collaborations with Beardyman and Foreign Beggars and the first of many tracks featuring Calyx’s previously undiscovered voice, the pair released a succession of chart-topping singles that led up to the award winning LP ‘All Or Nothing’. The pair achieved unprecedented success with the album; sweeping awards for ‘Best Single’ with ‘Elevate This Sound’, ‘Best Video’ with ‘Pure Gold, ‘Best LP’ & ‘Best Producer’. A near-constant run of radio plays led to the duo being asked to do a BBC Essential Mix – a true hall-of-fame moment for any artist in any genre. The mix was then voted as one of the five nominees for ‘Essential Mix of the year’.

Despite a never-ending tour schedule, there was no let up in their productivity and musical output. When they weren’t working on their next LP, the pair were in constant demand from a glittering and eclectic array of artists outside the genre: all seeking the Calyx & TeeBee remix treatment. From Rag ’n’ Bone Man to Rudimental, from Ed Sheeran to Example, Wizz Khalifa, DJ Shadow, Little Dragon – their sound had become truly far-reaching.

Another stunning run of number 1 singles throughout 2015 led to Calyx & TeeBee’s third LP: ‘1X1’. Covering a wide spectrum of styles, the duo continued to evolve their unique sound and maintain a constant presence at the top of the DnB charts. Whilst the club and festival tours continue unabated, Calyx & TeeBee never let up with their studio productions, building up another incredible body of work ready to unleash.

Through 2017 they have been releasing a track every month and a single every 2 months; and yet again they are omni-present in charts, playlists and lineups around the world. Having written the opening ceremony music for the world’s biggest DnB festival ‘Let It Roll’, they continue to fly the flag as leading lights of the genre. As their releases build up to a third album on Ram Records, there’s no doubt that their forthcoming LP ‘A Call To Arms’ will once again affirm the duo as one of the most exciting acts in electronic music today.

GLXY
Having been cited as ‘Ones To Watch For 2016’ by UKF at the start of that year, UK drum & bass duo GLXY are creating a real buzz with their soul-drenched style of production.
With both Tom and Jonathan having a background in music – clearly displaying itself in their music, the duo initially began working together during their time at the University of Leicester.
2016 brought the spine-tingling ‘Maze’ – released as part of MTA’s Winter Compilation in January 2016. This was followed up by their wonderful remix of “Empty Love” by Submotion Orchestra. They made their Spearhead Records debut with the “Expressions and Impressions” EP as well as releases and remixes on Hospital and Med School records.
2017 has seen them release their Sophmore EP on Soulvent records featuring the likes of Visionobi, Hugh Hardie and FD. The duo were also announced as a Shogun Audio exclusive signing where they will now be releasing their music and are set to release an album with them in the future.
The duo have gained support from the likes of Friction on Radio 1, London Elektricity, LSB, Spectrasoul and Murdock. Alongside their work in the studio, GLXY have also been notching up DJ sets across the UK and Europe with their creative and style-switching approach to mixing, most notably at a number of Hospitality events, Fabric and a number of festivals.
Undoubtedly set to become a familiar name as the year progresses, the smooth and richly melodic tones of GLXY are impossible to ignore.

Makoto
Makoto Shimizu, more widely known simply as “Makoto”, is a testament to the international scope and power of electronic music. Born, raised and still based in Tokyo, Makoto was influenced at a young age by a wide variety of music ranging from classical to soul and funk. Upon hearing the soundtrack to The Last Emperor by the academy award-winning composer Ryuichi Sakamoto, Makoto was so inspired that he made a life-changing decision – to pursue a career in music.

He went on to complete an Acoustic Engineering major at Nippon University, and having been introduced to drum and bass through listening to the radio shows of Giles Peterson on Kiss FM and BBC Radio 1, Makoto began experimenting with the genre through his own compositions. To him the appeal of this relatively new form of music was simple – drum and bass was just “very futuristic and cool”. His productions were of such quality that they caught the attention of none other than the legendary LTJ Bukem, who went on to sign Makoto to his seminal Good Looking Records imprint in 1999.

To paraphrase a lyric from one of his most famous tracks, music has never let Makoto down. Since that fateful signing in 1999, Makoto has gone on to be one of the most highly respected artists in the genre, pushing his unique blend of fast breaks and soul-drenched music to every corner of the globe as both a DJ and a producer. His discography includes 2 LPs, Live DJ Mix, a large number of EPs and numerous tracks featured on the world famous “Earth” and “Progression Sessions” compilation albums. Some of his most notable releases include his debut album “Human Elements”, which was released in 2003 and was widely praised for bringing the feeling of 70s soul music into the 21st century, and “Progression Sessions: Japan Live 2003”, which introduced his dynamic musical partnership with talented female vocalist Deeizm to the world. He achieved industry-wide acclaim through his powerful collaboration with LTJ Bukem’s ever present stage partner MC Conrad in 2005 through “Golden Girl”. The track was widely praised and played by DJs across the many sub-genres of drum and bass and became a certified genre anthem all over the world.

Incidentally, Golden Girl and 2nd Album “Believe In My Soul” were to be one of Makoto’s final releases for Good Looking Records. With a slightly different direction and more creative freedom in mind, Makoto began to release music for other labels such as DJ Zinc‘s Bingo Beats, London Elektricity‘s Hospital Records, Fabio‘s Creative Source and of course, DJ Marky‘s Innerground Records. His musical connection with Marky runs deep, and was solidified with his very own mix cd released on Marky’s label in 2009 titled “DJ Marky & Friends presents Makoto”. The pair went on to collaborate and release a number of tracks together the most recent being the 12 inch single “Aquarius / Good Old Days”.

Alongside this hefty release timeline and a touring schedule jam-packed with gigs across Asia, Europe, UK and USA, Makoto has been busy setting up his own label – HE:Digital. Focusing mainly on digital releases, the label has given Makoto an opportunity to not only release his own material, but that of others as well. In 2010 he released the compilation album “HE:Possibilities” through the label. The release was aimed at drawing attention to up and coming producers from Japan. More recently, he was proud to put out the charity compilation album “Something We Can Do” where all profits were donated to the Red Cross in Japan to help the victims of the tragic tsunami and earthquake which struck the country.

Together with these releases, the full-length album for brand new label Human Elements titled “Souled Out” featured many talented vocalists and session musicians, and is a culmination of the breadth of experience and talent Makoto brings to each track which credits his name.

2017 sees the next chapter for Makoto, signing exclusive to Hospital Records he kicks off the year with a brand new track ‘Speed Of Life’ on our celebratory ‘We Are 21’ compilation. There is no doubt this year will definitely be another milestone in the prolific musician’s already widely acclaimed career.