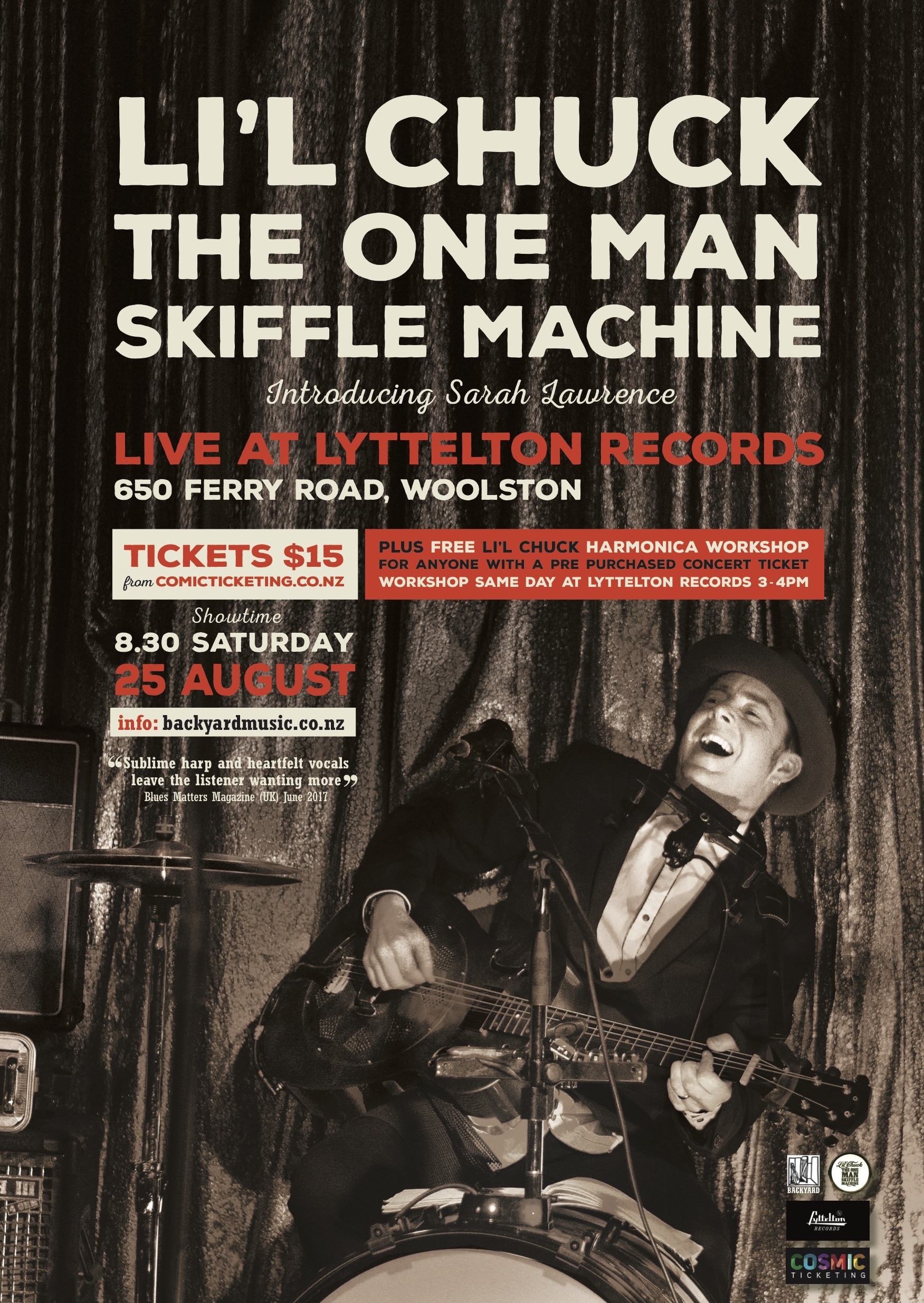 Li’l Chuck is preparing to head to the UK to record his 3rd album.
This gig will give you the opportunity to hear the new album tracks… LIVE! for the first time.

Here’s what they say about him!

“A true multi-instrumentalist & multi-tasker
in addition to a talented artist”.
No Depression Magazine USA. March 2017.

Your pre purchased concert ticket also includes a
FREE HARMONICA WORKSHOP!
3-4pm at Lyttelton records on the day of the gig (25th Aug)
Li’l Chuck will be holding a Harp workshop (for all levels).  Come along, pick his brains, get some tips, get inspired, play Harp and learn about The Blues…..
More about Li’l Chuck……
Having spent a lifetime rummaging through the drawers of 1930’s – 50’s music,  Chuck’s mostly original songs are inspired by the sounds of the era – Blues, Early Jazz, Western Swing, Ragtime etc. and are uniquely presented in the style of street performers from those glory days. Sticking to the traditional one man band format, Chuck plays all the instruments simultaneously.
Captivating story telling intertwines effortlessly with heart stopping harmonica. Multiple guitar styles are underpinned by his left and right feet  frantically pounding the kick and hi hat. The listener is left simply wondering, “How the hell does he do that”?
Originally hailing from the UK, Li’l Chuck first stomped out his music in New Zealand in 2003.
Li’l Chuck has performed at may high profile events around New Zealand. He recently played support for American legend Jimmy Buffet, Bluesman  Jerron ‘Blind Boy’ Paxton and The Topp Twins.
His 2017 album Utility Blues hit No’6 on the official NZ albums chart & he was the feature artist on  Jesse Mulligan’s Radio New Zealand’s Friday live.
In an age where we are rushing around at breakneck speed, where everything is instant, sugar coated, airbrushed and overly polished, Li’l Chuck brings us down to earth with some organic, all natural, whole grain, naked goodness.