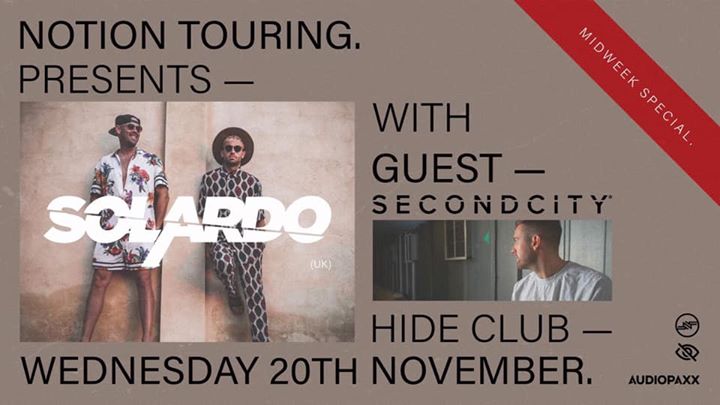 Notion Touring is pleased to be announcing one of the hottest duos in the house scene Solardo for a mid week special. If that wasn’t enough we have also called in Secondcity in support, you’ll want to get the Thursday off in one way or another, this is going to be large!

Earlybirds on sale Tuesday 1/10 at $20 including BF but won’t last!

Crowned DJ’s Best Breakthrough Act of 2016 and Best Duo of 2017, the duo’s meteoric breakthrough is a testament to their hard work in the studio and their infectious energy in the club. A slew of releases via imprints like Viva, MTA, and Elrow helped catapult them to their Hot Creations Beatport Number 1, ‘Tribesmen’, in October 2016. Thunderous EPs for Toolroom Records and Green Velvet’s Relief Records followed by widespread acclaim.

With standout sets at Circoloco at Blue Marlin Ibiza UAE, EDC, Glastonbury, Lovebox, and Ibiza under their belts, and ongoing support from DJ Mag, Mixmag and Deep House Amsterdam, 2018 looks busy as ever for the duo. Kicking the year off as DJ Mag’s cover feature, they went on tour across Australia and the USA, before picking up their Sessions tour left off after selling out the Warehouse Project. The 22 date Solardo Sessions tour included shows in Barcelona, ​​Milan and London – with all shows, sold out. The duo even found time to start their own radio show named ‘The Spot’. With the show being syndicated globally, Claude Vonstroke, MK and Nicole Moudaber to name a few. Release wise, the highly anticipated ‘Today’s News’ dropped on Lee Foss’ Repopulate Mars imprint,

Whether it’s Jamie Jones on her multiple world tours, Annie Mac on her Friday Night Radio 1 show, or Green Velvet and Jackmaster spinning at underground clubs, the support for Solo is across the board and as solid as the bass weight their tracks possess.