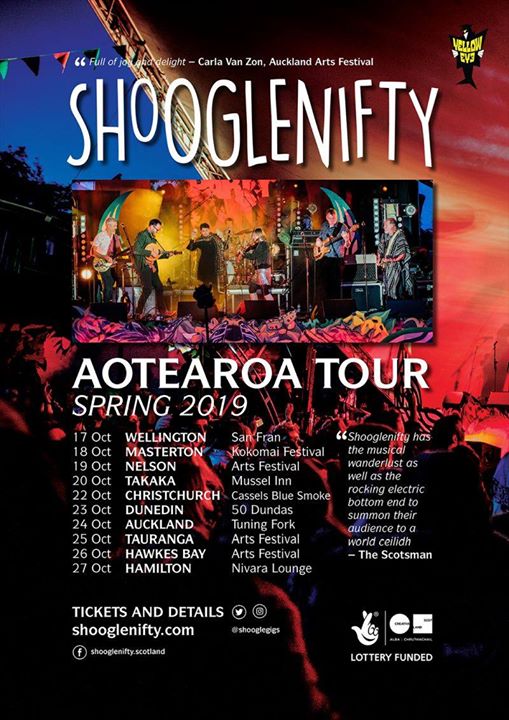 Scottish folk fusion stars Shooglenifty will be performing tunes and songs old and new when they head back New Zealand in October.

Fresh from a sell-out gig at the world’s most prestigious arts event, the Edinburgh International Festival, the Shoogles are on sparkling form.

Audiences in NZ will be the first to sample some of the band’s new tunes currently being prepared for their ninth studio album, slated for release in their 30th Anniversary year 2020.

They will of course be also showcasing many old favourites from their massive back catalogue, and are looking forward to introducing audiences to their effervescent new fiddler Eilidh Shaw (The Poozies).

“We have always loved to play in the land of the long cloud and have enjoyed a great reception from enthusiastic and friendly Kiwi audiences. We are looking forward to seeing more of the country on this tour and meeting new people” – Quee MacArthur, Shooglenifty

Shooglenifty, self-styled as “Acid Croft”, have the musical wanderlust as well as the rocking electric bottom end to summon their audience to a world ceilidh. ****” (Celtic Connections 2019) Fiona Shepherd The Scotsman

Rhythm is a special feature of dance music and Shooglenifty infuses heart-stirring rhythms into traditional Scottish-Celtic music in a way that stirs the soul and makes people clap and dance. Shooglenifty has a special musical talent that also fuses Scottish, African and Asian music producing a magical beat that made me clap and dance again and again. Don’t miss a chance to see and hear this exciting band…great music.
Professor Sir Geoff Palmer Chairman, Edinburgh Mela 2018

Shooglenifty was formed in 1990 by musicians from the Scottish Highlands, Orkney and Edinburgh, its bright spark was the idea of fusing traditional and traditional-sounding melodies with the beats and basslines of a mixed bag of more contemporary influences. As happy playing a small highland village hall as they are on an outdoor festival stage playing to tens of thousands, the Shoogles (as they’re known to their fans) have promoted Scottish music all over the world for more nearly three decades