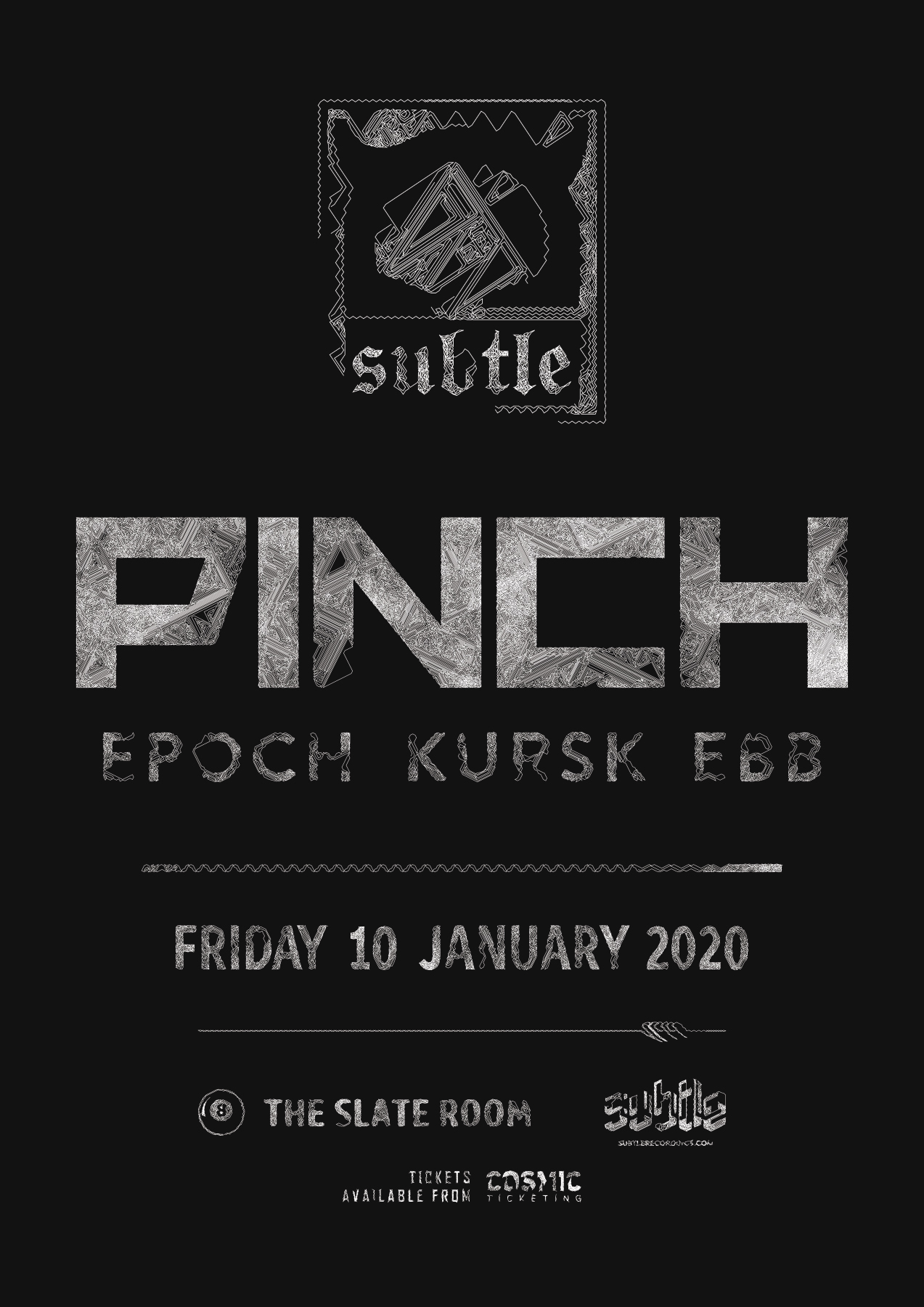 The quest to make, play and release truly original dance music is the driving force in Rob Ellis’s life.
The artist known as Pinch is a pioneer of dubstep, the sound that sparked one of the biggest waves of musical creativity ever seen in the UK. Subloaded, which he began in his adopted hometown of Bristol back in 2004, was the first dedicated dubstep and grime night outside of FWD>> in London, and to this day the impact of the party still ripples through Bristol’s bass community.

Techno’s endless permutations are as much an inspiration as dub in Pinch’s music. His DJ sets and productions take the term “dub techno” not as a concrete blueprint laid down by Basic Channel in the 1990s, but as a creative springboard to explore and combine two of the most versatile music styles ever conceived. The bass and dynamics of dub are interwoven with the tense soundscapes and atmospheres of techno. This is why you might find Pinch scorching the dance floor at a techno club one week, before rolling out a set of the heaviest dub, dubstep and dancehall the next.

The strength and flexibility of Pinch’s sound has naturally created a global demand for his DJ sets. Beyond regularly playing in the UK and Europe, he’s toured in over 40 countries, which has included the USA, Canada, Japan, China, Australasia, South East Asia, Russia and Mexico. This ongoing activity has also been reflected in media and radio interest. Pinch has recorded mixes for BBC R1, 1Xtra, Kiss FM, Resident Advisor, FACT and Red Bull (with whom he’s worked on various projects), while his 2012 session for the Fabriclive series remains a landmark in his career.

The vehicle for so much of Pinch’s work down the years has been Tectonic. Since founding the label in 2005, he’s released music from trailblazers like Loefah, Skream, Scientist, 2562, Photek, Digital Mystikz, Distance, Flying Lotus, Joker, Addison Groove and Peverelist, and he continues to cultivate fresh talent who have an eye on club music’s future. Seminal Pinch releases like the 2007 album Underwater Dancehall and tracks such as “Midnight Oil,” “Blow Out The Candle” and “The Boxer” have all appeared on Tectonic. Away from home, his releases and remixes have featured on leading labels like Planet Mu, Soul Jazz, Punch Drunk, Deep Medi, Swamp 81, Ninja Tune, Warp, Wichita, Wax and On-U Sound, collaborations that have yielded a few bass music classics—”Qawwali,” “Punisher,” “Croydon House,” “Swish.”

This openness to collaboration has been one of Pinch’s defining artistic characteristics. He’s worked with a broad swathe of club music producers down the years, which more recently has included a partnership with Mumdance that’s given us anthems like “Turbo Mitzi,” “Strobe Light” and “Big Slug,” which featured Riko Dan. Pinch’s collaborative work in the album format has also lived long in the memory. In 2011, he linked with the inimitable Shackleton to write an album for Honest Jons, while his ongoing work with the legendary Adrian Sherwood has so far produced two albums, 2015’s Late Night Endless and 2017’s Man Vs Sofa. The pair toured the globe together playing live dub sets as Pinch & Sherwood.

Moving into 2019, and with a deadly 12-inch for Berceuse Heroique soon to drop, Pinch has lined up a brand new series of collaborations that will be tearing through soundsystems in the near future. A follow-up to 2007’s Underwater Dancehall album is also in the works, a project that will build upon the longstanding foundations laid down by one of UK club music’s true originals