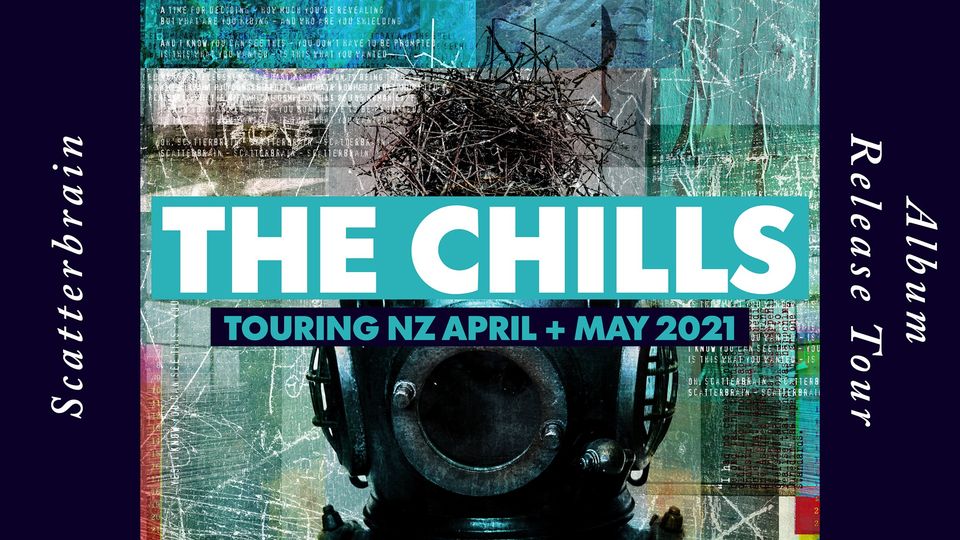 Pre-show dinner available from 6.30pm.
Bookings essential via bookings@bluesmoke.co.nz
The Sound, Under The Radar and Banished Music presents
The Chills – Scatterbrain Album Release Tour
Having announced the release of their seventh studio album Scatterbrain, The Chills announce a nationwide tour for April / May 2021.
April 16 Oamaru Club, Oamaru with ASTA RANGU
April 17 Larnach Castle, Dunedin Arts Festival SOLD OUT
April 18 Festival of Colour, Wanaka SOLD OUT
April 30 Cassels Blue Smoke, Christchurch with MOUSEY
May 1 Wakatu Hotel, Nelson with MOUSEY (solo)
May 6 St. Peter’s Hall, Paekākāriki with LUKE BUDA
May 7 Meow, Wellington with LUKE BUDA
May 8 The Cabana, Napier with DEVIL’S ELBOW
May 9 The Dome, Gisborne with BITTER DEFEAT
May 13 Totara St, Mount Maunganui with BITTER DEFEAT*
May 14 THE CHILLS & THE BATS Powerstation, Auckland with PURPLE PILGRIMS**
May 15 Town Hall, Raglan with BITTER DEFEAT
All tickets on sale from Banished Music except
Tickets on sale from Totara Street*
Tickets on sale from The Powerstation**
“An architect of New Zealand’s fabled Dunedin sound” Pitchfork
“Just glorious” The Guardian
“The Chills have never sounded better” Record Collector
Dunedin’s finest, The Chills release their seventh studio album ‘Scatterbrain’, a glorious self- examination of Martin Phillipps’ songwriting hot (ish) on the heels of the hugely successful ‘Snow Bound’ (2018) and the critically-acclaimed movie ‘The Chills: The Triumph And Tragedy Of Martin Phillipps’ a year later. As the rave reviewed movie premiered at the SXSW film festival, The Chills headed out on their first US tour since ’96 to further accolades whilst revisiting those esoteric extremes so wonderfully collected in the film which then simultaneously premiered around the world.
“It’s about artistic integrity, self- realisation, self-acceptance and a reflection on mortality.” The Guardian
Now in 2021, Phillipps is taking stock of things – everything. Yes, everything. The result is this triumphant new Chills’ album ‘Scatterbrain’, a thought- provoking and evocative stock take from a man who has lived through good times and bad. But now, the world is a different place and optimism is in short supply. Viewed from the perspective of a man understanding his age and indeed his own mortality, ‘Scatterbrain’ is underpinned, as ever, with catchy melodies and an incisive turn of phrase; it takes a mature look at matters arising with a side order of perspective as opening cut ‘Monolith’ displays.
‘Scatterbrain’ is a life passing before your ears as uncertainty increases and fake news rumbles on; during which aliens invade, Phillipps scales the walls beyond abandon as he probes the minutiae of worlds within worlds and the hourglass fills. A landmark album from one of the great modern song writers, it’s pure pop music for the new normal and we can’t wait to see how it ends…
Pre-Order the album HERE : https://fire-records.lnk.to/TheChillsScatterbrainID
Tickets on sale 9am, Monday February 22nd
+ Google Calendar+ iCal Export