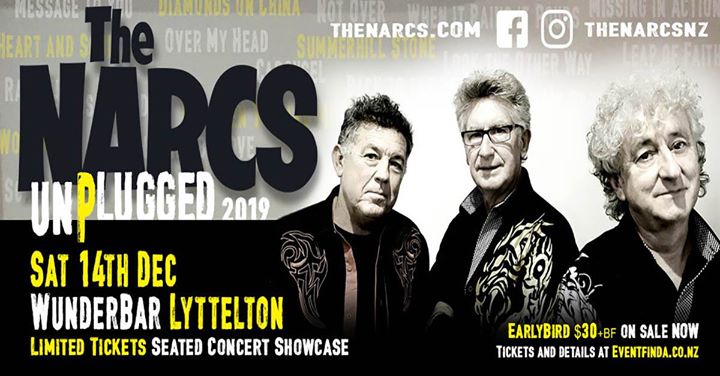 After sell-out shows in the North, there’s no turning back as The Narcs take their Unplugged Tour to the South with a hometown gig at The Wunderbar. This is a chance for the band to pull back the veil, strip things down and explore the many hidden songs from The Narcs’ back catalogue and side projects – as well as the hits.

More recently, 2018 saw the band release two singles/videos Summerhill Stone and Not Over, appear at Canterbury’s Selwyn Sounds, and tour with Psuedo Echo. 2019 has seen their Not Over Summer Tour, headlining Nelson’s Marchfest and playing a series of The Narcs Unplugged gigs. In 2020 the band will celebrate their 40th anniversary kicking off with more unplugged shows over summer and sharing the stage with Australia’s Icehouse as part of the Platinum Sounds Series.