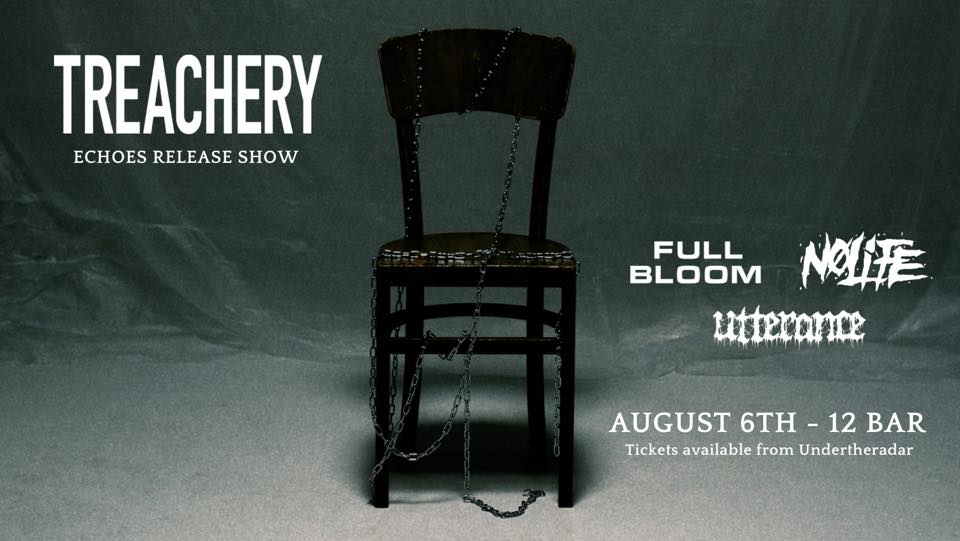 Christchurch 4-piece TREACHERY are celebrating the release of their new single ‘Echoes’ which was released on the 22nd June with an incredible video accompanying it. The band are currently working towards releasing their debut EP.

Making the ultimate heavy lineup, the bands joining them are:
FULL BLOOM
Full Bloom are a Metalcore band based in Auckland. Though the band itself may seem new, its 2 members definitely aren’t new to all of this: Louis Hill (Banks Arcade) & Josiah Forlong (Thy Assassin). They will also be opening in Auckland for Banks Arcade on their upcoming ‘Future Lovers’ Tour.

NO LIFE
No Life are a 4-piece metalcore/nu-metalcore band based in the South Island of New Zealand. No Life has been around since their first formation in 2019. However, the band only played a couple of shows before going quiet. During the time since then, Connor’s (original member) determination was still there to get the band going again and release more music. They have recently released their 3-track EP ‘Radical Thoughts’ as well as a video for the lead single ‘Backchat’.

UTTERANCE
Visceral Hardcore/Deathgrind band from Christchurch. They just released their new single/video ‘Assured Violence’ from their upcoming EP which will serve as a follow-up/evolution of everything they established in 2021 with the release of their EP ‘The Fragile Line Between Strength And Arrogance’. The band believe this new EP will showcase their best work-to-date.