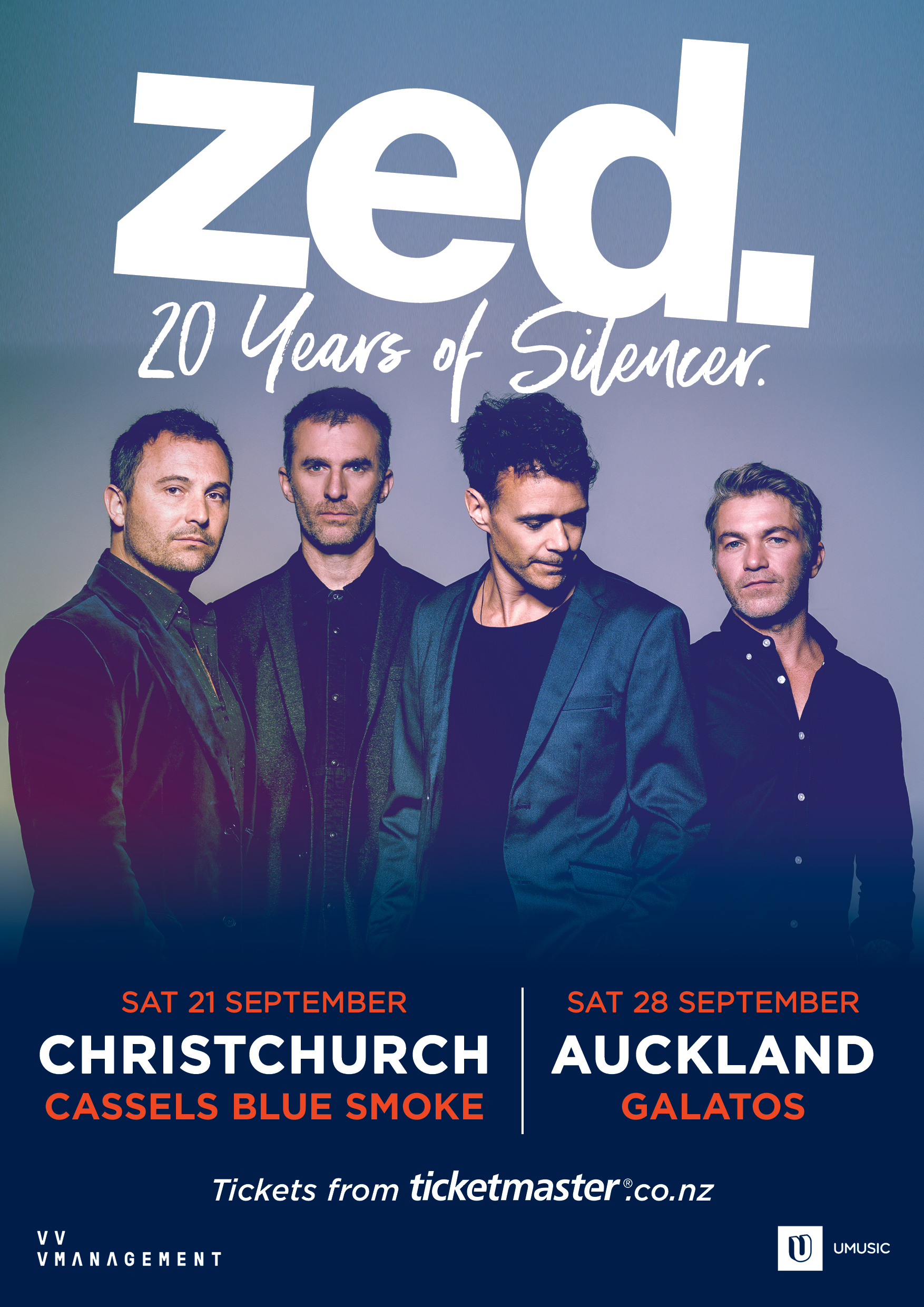 Zed have announced they will be celebrating 20-years since their debut studio album ‘Silencer’ by giving fans the opportunity to see them live this September.

Zed is reuniting to celebrate two decades of number one hits, arena tours, and loyal fans. Zed will be playing two intimate shows, one in Auckland at Galatos and one at Blue Smoke in Christchurch.

Their road from fledgling high school rock band, to multi-platinum success story, began inauspiciously in the basement of a quiet suburban home, during the winter of 1996. Nathan King (guitar/vocals), Ben Campbell (bass) and Adrian Palmer (drums) started crafting the songs that would form the foundation of their debut album in the lower levels of Campbell’s family home, during their final years at high school.

“Our first single, ‘Oh! Daisy’ was actually written as a sixth form music assignment. When that went on to become a Top 20 hit, we could feel things begin to change for us, even then,” recalls frontman Nathan King.

‘Oh! Daisy,’ an ode to unrequited love, was followed up by ‘I’m Cold’. After three years performing regularly at the legendary Dux De Lux in Christchurch and Wunderbar in Lyttelton, Zed got their first bona-fide hit. ‘Glorafilia’ crept slowly into New Zealand’s consciousness through the summer of ’99, becoming the soundtrack to beach holidays up and down the country, and stretching to a remarkable 36-week run in the Top 50.

Signing to Universal Records early the following year, Zed called on guitarist Andy Lynch, who had been living in Brazil, to complete the musical picture. With mounting pressure from their fanbase to produce a full-length album, Zed went into the studio in May of 2000 for a six-week stint with producer David Nicholas (INXS, Midnight Oil, Pulp, Ash).

Zed sent fans into a frenzy in 2000 when their album debuted at number one on the Official New Zealand Top 40 Albums chart, knocking Robbie Williams from the top spot, (an artist the band would subsequently tour with), quickly achieving triple platinum status, and creating six hit singles. One of their most celebrated singles ‘Renegade Fighter’ was also the number one song in New Zealand for the year 2000. In 2001, ‘Silencer’ earned the band three wins at the New Zealand Music Awards including ‘Album of the Year’, ‘Top Group’, and ‘Top Male Vocalist’.

Finally, in 2005, Zed decided to take an extended break – drawing to a close what had been for the band the adventure of a lifetime. Bassist Ben Campbell recalls it was a challenging time. His father had become ill and then passed away while they were working on the release.

“We’d been together for 8 or 9 years, working on it full time for six years,” explains Campbell. “I think we felt like we’d given it a really good push. It just got to a point where we were ready for a change as individuals and as a band.”

Now in 2019, all four members of Zed are excited to announce their return – to celebrate the upcoming 20th anniversary of their debut album ‘Silencer’, and to reconnect with their loyal fans who’ve shown such ardent support.

“It’s nice to get back together, have a barbecue or two, reminisce a bit, and play some of the old songs,” says Campbell. “It reaffirms how strong those relationships are and what the experiences we went through mean to all of us.”